Cheers to the winners of Woking Best Bar None Awards

Gold plaques gleamed in celebration of Woking’s top venues at the Best Bar None Awards, held at the WWF Living Planet Centre on Tuesday 16 October 2018.

Sponsored by Asahi UK Ltd and supported by the Woking News & Mail, Office of the Police and Crime Commissioner for Surrey, Best Bar None recognises premises in Woking that are great places for all residents of the Borough to enjoy an evening out. 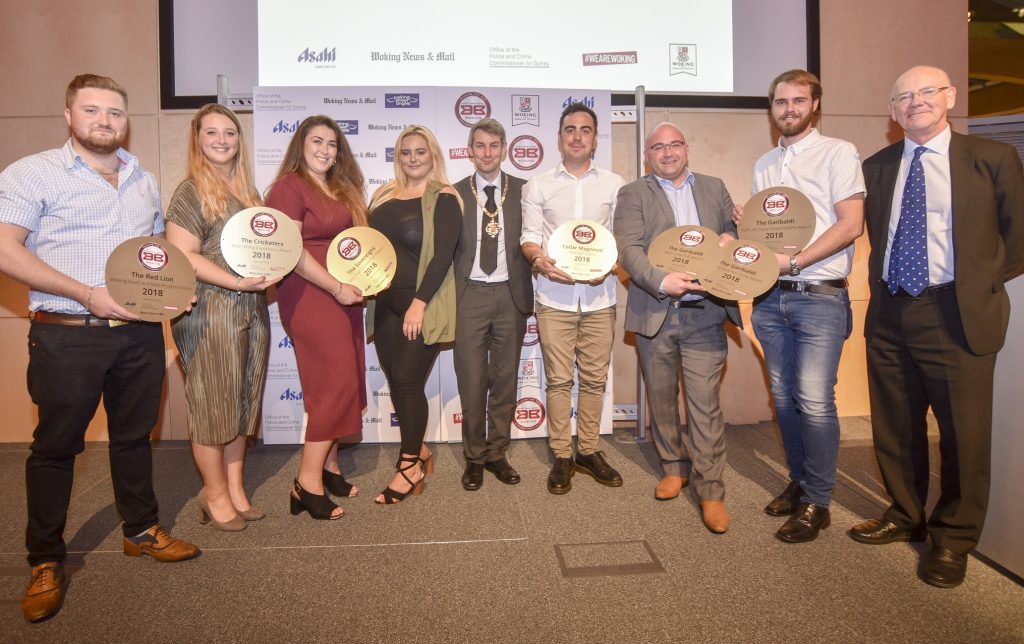 Winners of 2018 Woking Best Bar None Awards. From left to right; The Red Lion, The Cricketers, The Sovereigns, The Mayor of Woking Cllr Will Forster, Cellar Magneval, The Garibaldi and David Munro, Surrey Police and Crime Commissioner

All of the 17 participating bars, pubs and restaurants were assessed by qualified Best Bar None assessors to judge how well they met licensing, safety and responsible retailing criteria. Points were awarded for steps taken to prevent crime and disorder; plans for ensuring public safety; dealing with public nuisance like noise, litter and waste; and demonstrating steps to protect children from harm, such as having a robust proof of age policy in place.

All venues that met the Woking Best Bar None criteria were then permitted to display a gold, silver or bronze sticker in their premises window. An independent panel of judges then chose the cream of the crop to be awarded the prestigious title of Best in Category.

Patrons were also given the opportunity to show their appreciation to their favourite establishment by voting for them in the Woking News & Mail People’s Choice Award. Voters were entered into a free prize draw to win a weekend away for two in a luxury hotel in Dartmoor National Park or a runner up prize of £100 of vouchers to spend in any two Best Bar None award winning pubs of their choice.

Congratulating the winners, Cllr Debbie Harlow, Chair of the Licensing Committee, said: “Thank you to every licensed premises across the Borough that took part in these awards and my warmest congratulations to the winners.

“The awards are more significant than simply identifying the best establishments to visit, they acknowledge the huge contribution that these bars, pubs and eateries make to the leisure and night time economy of the Borough.

“Whether a winning establishment or not, simply by participating in the scheme, our licensees and their teams are helping to ensure that the Borough remains a safe, responsible place to live, work and play.”